Skip to content
Iron Liege and the Crazy Train 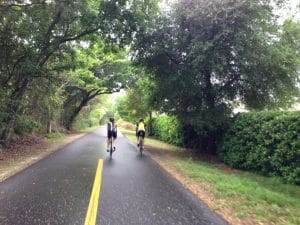 It’s officially 7 days until I toe the line at my FIRST 140.6… and I am freaking out a little.   People seem to think this is normal, but I’m a little shocked.   I’ve been looking forward to this for a year… since the day that Angie, Karrie and I volunteered to catch bikes at Ironman Louisville.  It’s not as if it’s a surprise, as if I woke up this morning and thought “Holy Cow… I have to swim, bike and run 140.6 miles…”

Louisville has been on my mind a lot the last several months.

Sometime last fall, between Rev3 Cedar Point and Rev3 South Carolina it jumped from “Wow, that would be cool!” to “Let’s do it!”  Then Angie signed up – you could almost hear the collective GASP on Facebook!  We were like dominoes… ALL IN – well 8 of us were IN – 6 Ironman rookies and 2 veterans.  Cooler heads did not prevail and the “Crazy Train” was born.  That’s what we decided to call ourselves… we even have a theme song;  Ozzy Osbourne’s “Crazy Train”.

Last fall, when I asked my coach if he thought I was ready for an Ironman… I got the long pause that I’ve grown used to when I say something completely crazy.  How can you ever really be ready for a race like this – much less in your 2nd year as a triathlete?

How was I supposed to know that getting ready would be such a journey?  I stopped “exercising” and started “training”…  A LOT. Since January the Tri Tornadoes have swam over 1,794,437 meters (YES… almost 2 MILLION meters), we have also biked 18,992 miles (to put that into perspective the circumference of the earth is 24,900 miles); and we have ran a collective 6,103 miles… almost to China.  Crazy, right?

All of this training has given us a lot of time to talk… about chafing, pacing, heart rate training, biking, running, swimming, going to bed late then getting up really early, bikes, shoes, wet suits, peeing on bikes, peeing in wet suits, GU, nutrition, Gatorade, heat, transitions, race pace, the swim start line, the underpants run, race execution and the finish line…

It has been both much harder and much better than I expected. 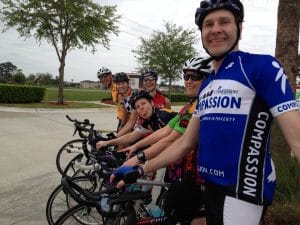 Every Sunday we, like countless other triathletes, get together for our long run.  The long runs are hard.  Like everyone else, we ran in January and February, in the DARK when it was beyond cold.  We run in the rain, when we feel great and when we’re exhausted, sore, chafed and tired of training – but we usually run together.  There has always been at least one of us with the strength and motivation to get started.

We start early and run the streets of our coach’s neighborhood.  A lot of the streets are named after RACE horses… seems like the perfect place for a bunch of triathletes to train, right?

We start these runs on Gallant Fox Drive.  Gallant Fox won the Triple Crown in 1930 – ironically his coach also discovered that he worked best with company.  Just like the Crazy Train.

Then we turn on to Spend A Buck Drive…  REALLY… I am NOT kidding!   Pretty much self-explanatory… Race fees, spandex, bike tires, gels, wet suits… it takes a lot of gear to finish 140.6.

From there we run roads named after Chateaugay, Secretariat and Dark Star before turning onto Iron Liege.  At first I thought about how Liege means “loyalty” so Iron Loyalty, right?  Then I looked him up!  You won’t believe this.  Iron Liege won the Derby in 1957.  He was an underdog; then in the last seconds of the race Willie Shoemaker mis-judged the finish line and stood up causing the lead horse, Gallant Man, to slow.  Iron Liege won by a nose because the faster horse did not execute his race plan!   He didn’t follow through!  Sound familiar?  How many times have you heard that a good Ironman race is all in the “proper execution of your race plan”?

From Iron Liege we turn onto my favorite street… because of its name and because it means we’re almost done running.

Friendship Drive…   Triathlon is an individual sport but it’s better when shared with friends and family.  Friendship pulls you out of bed a 4:30 am to dive into a cold pool.  It makes you smile on mile 80 of a long ride.  It’s what keeps you going as you swim to the moon, bike around the world and run to China.

7 days from now, when we line up for the swim start we will be ready.  We will be ready because we’ve followed the plan, trained hard, cut no corners, never given up or backed down.  When we are fresh and feel like flying through the first miles of the bike, we’ll remember Iron Liege, we’ll hear Coach Todd saying “execute your race plan”.. so we’ll settle in and start the work of 140.6.  As the day wears on and we grow tired, when we want to give up, when our backs ache and our legs burn; when we can no longer fight ahead for ourselves alone we will remember Friendship, Family, our “WHY”.   We will finish.  The goal, set so long ago and earned not just in a single day, but with months and years of work, will be reached.

We will know, in that moment, that nothing is impossible.

See you at the Finish Line,

About the Author: Heather